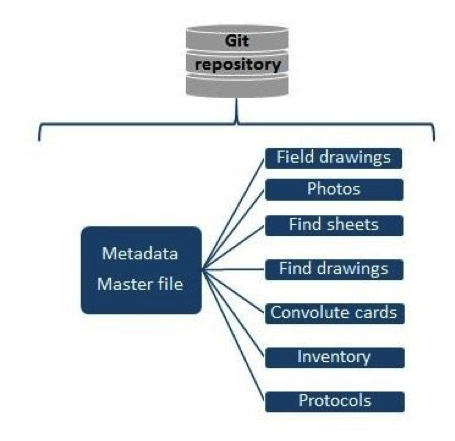 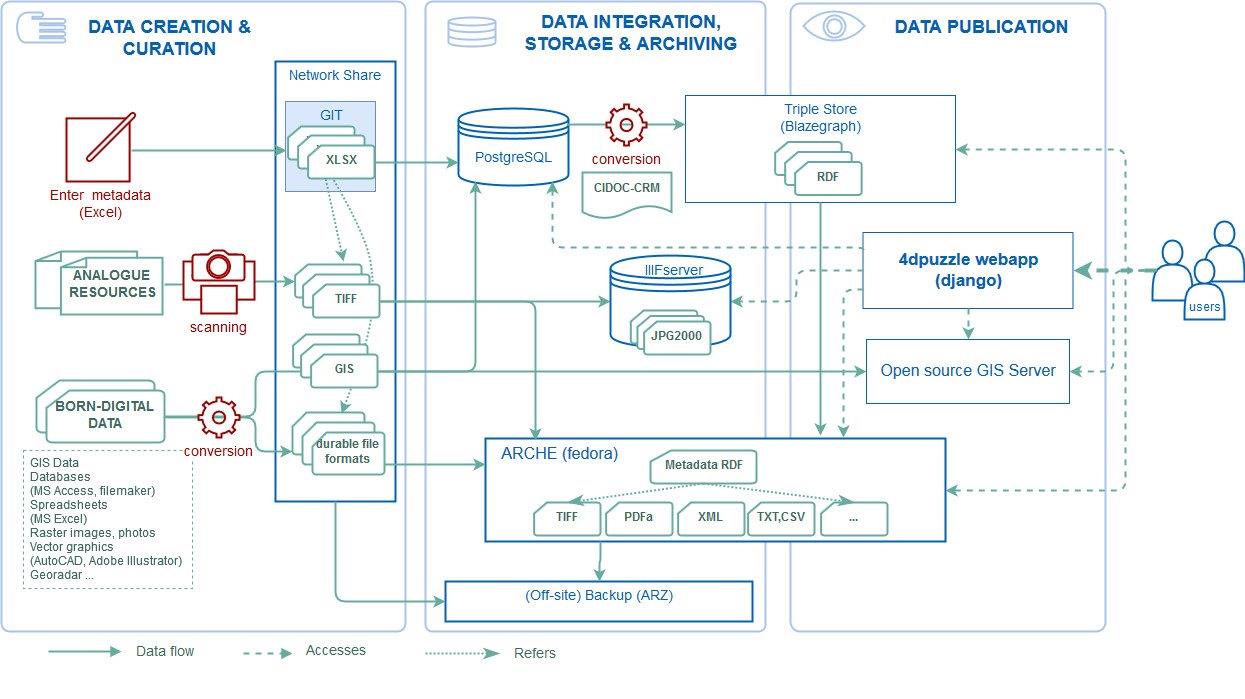 In very simple terms it can be said that the physical reality of archaeological features and finds (including archaeological objects, i.e. buildings, graves, pottery created in the distant past that were found in specific excavation areas (excavation objects such as squares and areas created by the archaeologists in the not so distant past) are documented in analogue and digital documentation. This documentation, which is stored in either physical archives (OREA or archive in Cairo) or digitally on the OREA network drive (‘TD Archive’ folder) is digitised (if analogue) or prepared for digital preservation (if born-digital) in the Puzzle 4D project.

Consequently, the 4DP metadata contains the following types of information:

Metadata fields were reviewed in 2017 (for midterm evaluation) and fields that were not important or redundant were removed.

We found the flexibility offered by MS Excel was an advantage compared to other systems which would need development of a user interface or customisation of an existing interface to accommodate the needs of the project. Another big advantage is that users are accustomed to this default piece of office software. After defining the main categories of the data structure and creating an identifier policy we could immediately start the metadata entry process. Furthermore, Excel allows to enter values quickly (e.g. entering the same value to many cells at the same time, where a database only allows to enter one value at a time), which was another important argument to stick with Excel.

Disadvantages are that this method is more prone to errors, as identifier handling and management is performed by humans and requires constant monitoring and regular quality assessment. Quality control took place when data from the spreadsheets was further processed, creating the Knowledge Graph and ingesting into the 4DP webapp, which helped to identify errors and inconsistencies in data entries. Several rounds of corrections were required, however, we still think that this workflow allowed to process a larger amount of resources than we would have been able to handle with entering data in a database via an entry form, where data entry would have been much slower, let alone the substantial amount of work that would be needed to develop such a bespoke database application. Only few students were involved in data entry and they became experts in TD documentation and were also able to correct any mistakes quickly.

The mappings of the metadata spreadsheets to CIDOC CRM created a knowledge graph, making explicit the individual entities and the relations between them. This knowledge graph represented in RDF (Resource Description Framework;) was ingested into a triple store (Blazegraph, https://blazegraph.com/). Relations between the resources are either established on the class level (because they belong to the same CIDOC CRM class, e.g. “document” or “physical thing”), on the SKOS concept level (because the same thesaurus term was attributed to them, e.g. “field drawing”) or on an instance level (because they describe the same excavation area or archaeological feature/find, e.g. “Site TD, Area F/1, SQUARE j/21, Planum 3”).

The actual final workflow from the metadata to an integrated web application with all metadata and digitized objects integrated and searchable involves a number of components (Figure 3):